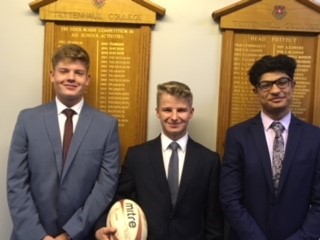 The U13 and U18 Rugby teams have got the season off to an impressive start with two major wins against Nottingham High School and Stafford Grammar. Sixth Former, Lawrence Sutton writes:

In a hard fought match against long-time rivals Stafford Grammar, the U18s rugby team triumphed with an impressive score of 14 -5. The game was hard and fast with both teams making big breaks with key players, scything runs made by our own Joe McKaig and Cameron Watson. The grit and commitment displayed by the five Year 11 students was impressive, sadly resulting in an injury in the last play of the game for George Shipway after a stunning debut match.

James Bullock, Head of Sport comments: “It was a great game played with a huge amount of heart with everyone stepping up to the physical challenge. Two stunning tries were scored by Sully and Cameron, with two conversions by Cameron. Worthy of mention was the contribution from some of our Year 11 boys and from an impressive newcomer to the sport, Fola. A great start to the season.”

The U13 Rugby team played Nottingham High School on the 15th of September. The game was highly competitive and resulted in a 25-10 win for TC. In the words of the captain, Zayd Aurangzeb, “The team aggressively defended. We won the rucks, and sped the ball out to the back line quickly. One hundred percent effort was shown throughout. Let’s hope the U13s can keep their good form up into the coming season”.

On the 12th of September, the U16 boys football team travelled to Nottingham High school to play in the regional ISA tournament. The tournament resulted in the team coming away with a win and two losses. Captain Jimmy Hague said: “The team showed promise, and for a young, developing squad we played well.”