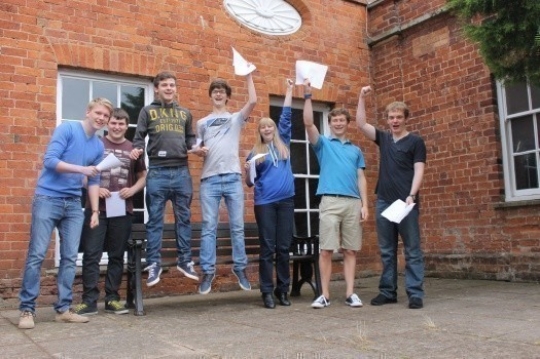 More than half of pupils gained A* – B grades and the school has reported its best ever performance of A* achievers (13.3 per cent).

Headmaster David Williams said: “We are very proud of our pupils and I’d like to take this opportunity to congratulate them all, not just on their academic success but also on the significant contribution they have made to the school and wider community. They have been an exceptionally hard working group. They deserve every success and we wish them all well for the future. We maintain close links with our pupils, even after they leave, and look forward to hearing how they get on.”

“The results show an overall improvement from last year and we are very pleased that their efforts have paid off. We have pupils going on to top universities, studying challenging subjects such as maths and mechanical engineering.”

“We also take pride in the fact that alongside our academic achievements our pupils undertake a considerable amount of community and charity work and take part in varied activities such as drama and sport.”

“We are committed to ensuring that all pupils have an enjoyable and well-rounded education that develops their personal strengths.”

Among the School’s A-level successes was Tom Darby, of Telford, who gained a place at Oxford to study Maths after achieving three A* grades.

He said he was looking forward to joining the prestigious institution and added: “I’m very happy and relieved.“

Both the Head Boy, Scott Place, who was a boarder at the School, and Head Girl, Laura Saul, of Sedgley, will be going to Cardiff studying History and Maths respectively. They will also be joined there by fellow pupil Adam Long who will study Astrophysics.

Other pupils will also be heading to top universities such as University College London and Bath.

Tettenhall College, one of the region’s leading independent schools, has local, national and international pupils, with some boarders from as far afield as China.