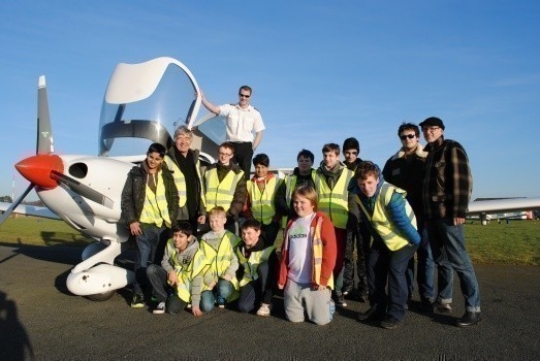 High-flying pupils from Tettenhall College had the chance to take to the skies when they enjoyed an exciting visit to Wolverhampton Airport.

Fourteen pupils took part in a weekend trip to the airfield and had the opportunity to experience flying, both through a simulator and in the air with a flight instructor.

Westbeach Flight Academy, based at the airport, had presented an assembly on careers in the aviation industry, principally that of a pilot, and extended an invitation for children to come and see them in action.

Initial foggy conditions meant the visit began with a talk from the crew staffing the £5 million Police Helicopter at the airport. But as the weather improved, the opportunity to take flight emerged.

Mark Leighton, Director of Art, Head of UCAS and Careers, accompanied the children and said everyone had a truly amazing experience.

“We were briefed on board the Diamond DA40, and placing the headsets on we were soon in the zone, listening to the commands coming from the control tower,” he said.

“In between pairs getting air born, each of us had 20 minute sessions in the flight simulator with Jet2Com pilot Captain Russell Steel. The aim was to take off, follow a flight path and land safely. Regrettably, not being of the PlayStation generation I crashed short of the runway!

“It was an incredible day full new experiences and we can’t thank the crew and staff of Westbeach Flight Academy enough.”

Categories: Extra Curricular
Where Next?