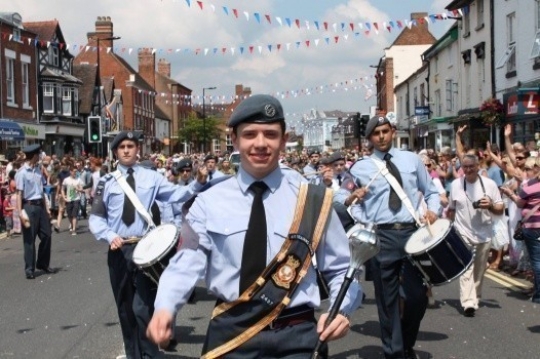 Pupil James Alder had two reasons to celebrate after becoming the highest possible rank for his age group in the RAF cadets and also being commended for his achievements at a prestigious city awards.

The high-flying pupil, aged 16 and from Wheaton Aston, is now a Flight Sergeant with the cadets, which he only joined three years ago.

To cap a memorable year, James’ achievement was also recognised in the city when he was nominated for The Wolverhampton Young Citizen Award 2014.

Judges commended him for his outstanding work and fantastic contribution to the cadets and the wider community. James was nominated for his willingness to support and volunteer at community events and also his work to raise money for charity.

This has included participating in The Veterans’ Parade, undertaking car parking duties at the RAF Cosford Airshow, directing traffic at the Queen’s Jubilee celebration, promoting the Cadets to others at public events and supporting new entrants, as well as collecting money for the Poppy Appeal.

He has also helped to clean and maintain the Albrighton War Memorial, been Band Master at numerous regional parades, fundraised for the cadets through supermarket bag packing and also led a parade, again in Albrighton.

Mark Leighton, Director of Art and Head of UCAS and Careers at Tettenhall College, said that the school was very proud that James had been nominated for the Wolverhampton Young Citizen Award and was fully deserving of his praise and recognition.

He said: “James is a very well-mannered student of ours, one who unhesitatingly will volunteer, or when requested go the extra mile for others. He has been a student at Tettenhall College for many years and in this time he has impressed us with his commitment and support of the school and to the numerous events we hold. More importantly we are very impressed with the support he has shown to the community beyond our gates.”

Indeed, this is not the first time that James has been commended for his outstanding service. During his time with the RAF Cadets, he has also been presented with The Richard Wright Memorial Award for Aeronautical Achievement, The Cadet of the Year Award and also The NCO of the Year Award.

Categories: Extra Curricular
Where Next?