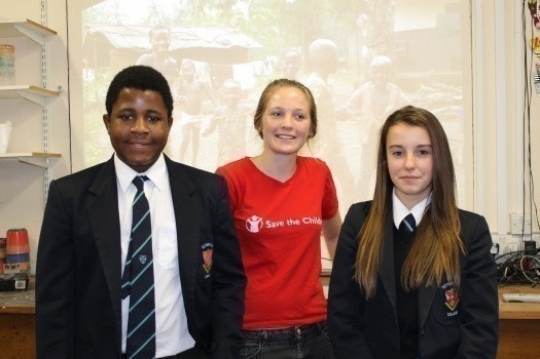 A former Tettenhall College pupil has returned to the school to speak to children about her experiences, including working with Ebola patients in Sierra Leone.

Natalie Kirkhope has been working as a nurse for Save the Children and returned to the School to deliver an inspirational assembly.

She spoke about her experiences since leaving in 2008, including a gap year working with orphans in Kenya, developing sustainable living in Liberia, working at Great Ormond Street Hospital and her most recent six weeks working with Ebola patients in Sierra Leone.

Mark Leighton said her assembly had captured the attention of pupils and raised their awareness of the extent of the crisis: “Her stories touched everyone, opening up our hearts to the plight of the most vulnerable and to the courage of many with whom she worked.”

Natalie was a boarder at Tettenhall College has spent months living and working in Nairobi teaching, where she initiated several sustainable programmes including the provision of livestock to children’s homes in Nairobi.

She then went on to Nottingham University where she studied paediatric nursing, before joining Great Ormond Street.

In 2012, she was given the chance to travel to Liberia with Save the Children to experience their programmatic work. Following this, she was inspired to study a Diploma in Tropical Nursing at the London School of Hygiene and Tropical Medicine.

From there. she gained a position doing quality improvement and capacity building work in rural Sierra Leone. She lived without electricity and internet access, trying to deliver safe healthcare to mothers and children.

Natalie was sadly evacuated due to the evolving Ebola crisis but applied to go back out as soon as she could and joined Save the Children at their Kerrytown Ebola treatment centre over Christmas and New Year.

She said: “I loved my time as a boarder at Tettenhall College; we were always encouraged to think independently and explore new activities and cultures.”

“The encouragement received from my teachers, even now seven years after I left, has been a great source of support for me whilst working abroad.”

“It has been good to be back in the UK and I’m looking forward to getting back to work at the Homerton emergency department in London and planning the next adventure.”